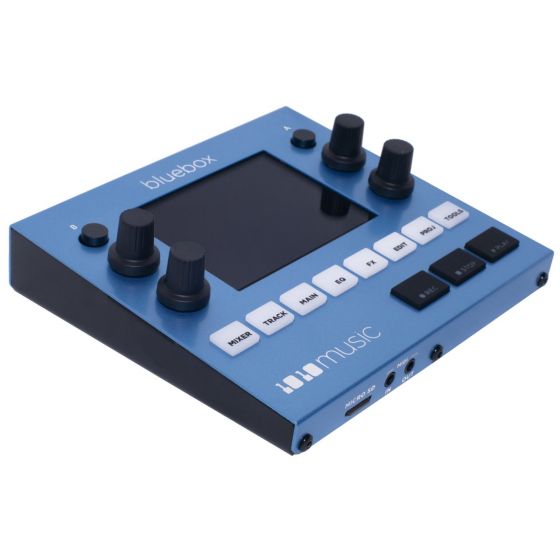 Bluebox is the portable digital audio mixer that integrates your electronic music gear. Connect your eurorack, sampler, drum machine and synthesizer outputs to 6 stereo, 3.5 mm TRS inputs and map them to 12 mono tracks or 6 stereo tracks – all with independent control for recording and playback. It’s that keyboard mixer with live performance features that you always hoped someone would make.
Connect the output of your electronic music gear to bluebox, and then route each track independently to the three outputs and effects sends. Each track offers control of volume, gain, 4 band parametric EQ, pan, mute and solo functions. Apply high-quality global reverb and delay effects along with 4 band EQ per track to add new depth to your sound with total control to quickly tweak incoming audio or track playback as needed.

With bluebox you can record independent tracks or the Main mix using a standard microSD card. Capture your jam session for later review, or record the ultimate mix of the tracks for your song.

Bluebox’s compact 5.5” x 5” x 2” case lets you tuck it into a crowded tabletop studio or throw it in your pack for the next gig.

Interact with the dynamic visual interface on the 3.5” touchscreen along with physical knobs, navigation buttons and transport buttons to quickly access the most important functions. MIDI input and output allow you to sync the clock with external gear for synchronized effects and metronome.