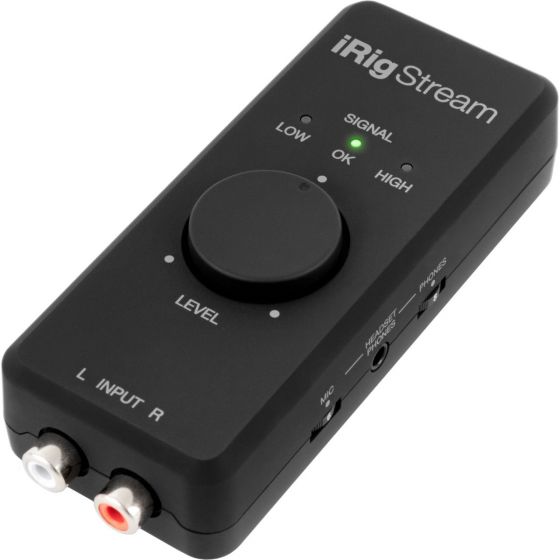 Get audio content to your online audience with the IK Multimedia iRig Stream, an ultracompact 2-channel audio interface designed for plug-and-play compatibility with iOS/Android mobile devices as well as Mac and Windows computers. Equally useful for musicians, podcasters, and social media video creators, the iRig Stream features straightforward connections and simple controls for input and output levels. Plus, the iRig Stream will premix the sound sources to a stereo or mono output signal, so you don't have to manually mix them.
The interface's stereo RCA input allows you to hook up a feed from a DJ mixer, mixing console, keyboard, or drum machine, and its 3.5mm TRRS port lets you talk over the stereo input when you connect a headset, headphones with a built-in mic, or other IK Multimedia devices such as the iRig Mic Lav, iRig Mic, and iRig Pre (all available separately). There's also a loopback function that merges your device's output with the iRig Stream's input and routes it back to your device—perfect for singing/jamming along to a backing track or narrating a video.