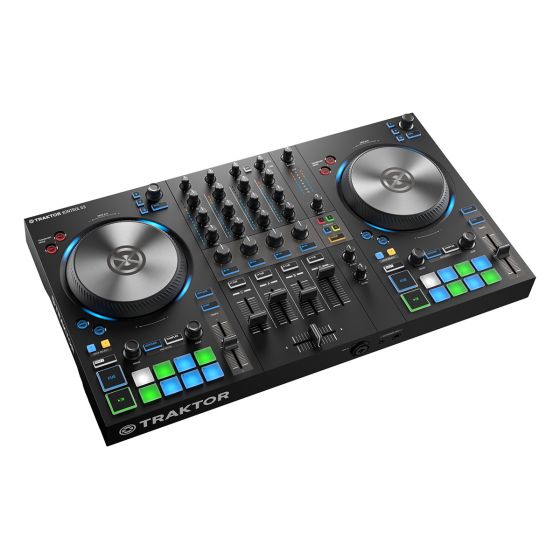 Described as an “essential” four-channel controller, this performance-orientated device offers upsized jog wheels (though not with the haptic feedback of those on the S4), extended pitch and channel faders, and a mixer section with EQ, filter and Mixer FX controls. Each deck also has eight RGB pads for triggering hotcues, loops and samples.

DO MORE WITH FOUR
Layer tracks. Go back-to-back. Hook up a mic and an MC. Keep a wildcard up your sleeve and drop it when the dancefloor needs it: TRAKTOR KONTROL S3 has everything you need to DJ across four decks. Step up your sets, and play with total freedom.

FOUR DECK DJING
If you’ve been DJing on two channels so far, doubling down on decks means way more freedom in your mix – like layering beats, firing off samples, or keeping a banger track parked on Deck C. Whether you’re throwing in acapellas or love a double drop, four decks make it happen.

FOUR DECKS, AT YOUR FINGERTIPS
At the heart of the TRAKTOR KONTROL S3 is the four-channel mixer, with full-length faders, EQ, cueing, and Mixer FX control over each deck. Juggle Hotcues, samples, and loops with eight RGB pads on each deck. When it’s time to take things further, switch decks and keep on-track with the jog wheel light rings.

FROM SCRATCHES TO SPINBACKS
When it’s time to get your mix on, there’s plenty of jog wheel to go around. Touch-sensitive and super smooth, they’re not just for nudging and stalling, but feel great for scratch workouts too. RGB light rings let you know which deck is playing at a glance, and warn you when you’re almost out of track.

RE-EDIT, REWORK, REINVENT
Fire off samples, loop drum patterns, chop in vocal cuts, or even work your own productions into the mix if that’s your thing. Loop any part of a track and assign it to a pad, or skip to any part of your track using Hotcues. TRAKTOR PRO’s beatsync means you’ll never lose the groove.

MIXER FX ONE-TOUCH DANCEFLOOR TRIPS
Cut the kick and open a reverb, or chop things up with a dotted delay – Mixer FX are one-touch effects on each channel, great for building energy, shaping your sound, or just going wild. Choose from eight effects and three filters, and assign them to the dedicated slots on the mixer for quick access.

DJ EVERYWHERE WITH iOS
Grab a portable speaker, hook up an iPad, and take your S3 on the road with TRAKTOR DJ 2 – mix with two channels on a streamlined interface, and dig through a bottomless record crate with SoundCloud Go+ integration.

HIGH-FIDELITY, BETTER CONNECTED
Set up and spin with punchy, pro-grade XLR and RCA main outputs with a huge dynamic range, as well as a ¼” TRS booth output, and 3.5 / 6.3 mm headphone outputs. For hooking up a vocalist or MC, there’s a dedicated combo XLR input on board, as well as an additional RCA input for mixing with external audio.